Finally had the chance to celebrate fatty hubby's 40th birthday today! (^^) He was too distracted and bogged down with work to do anything on the actual day. 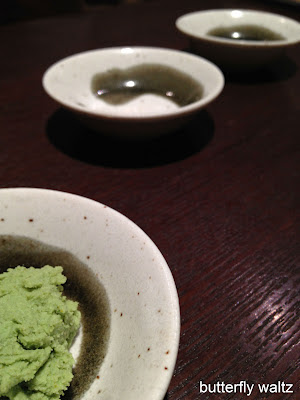 The big FOUR ZERO ~ a major milestone (^^||).. it scares me (mine's right round.. er, the "far" corner), but at the same time, it's exciting (?!) times for us too. At 40 (I mean he's 40.. I'm "29".. ok, maybe "31"?), we "had" to get ourselves in debt (after many, many years of being debt-free and free-spending) by buying a house that's probably too big for just the two of us! Though I'm excited about the new place.. I also can't quite bear the thought of leaving (selling) my little "almost-perfect" (my darling piggies live in the same block) apartment! What did we get ourselves into, right?

Anyways, enough about that.. this post is not about our dilemma.. but about something interesting we had at a japanese restaurant today. Shirako, cod milt.. cod what? Yes, that's what I thought when I saw that on the seasonal menu at rakuzen's. But I conveniently ignored "milt" and conveniently thought that it was some deep-fried cod fillet something.. The picture on the menu sure looked appetising, like succulent tempura oyster or something like it.. 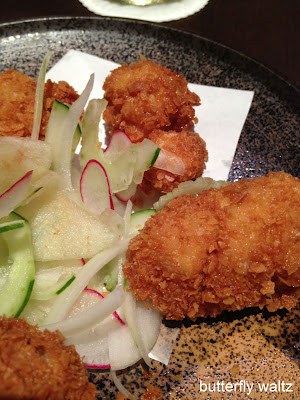 Looks just like oyster tempura, doesn't it? It's served with drizzled mayo in worcestershire sauce (tastes almost like a kushikatsu dip).. 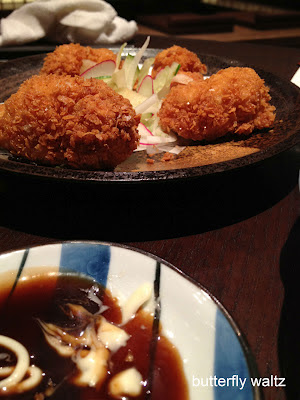 It was the last thing to arrive and we were full by then..  But I love cod fillets.. so I stuffed some in anyways. It didn't taste quite like fish.. rather, it was soft and creamy.. which was rather odd. Fatty hubby had some but said nothing, of course. So I took a bite off to take a look.. whoa!!! 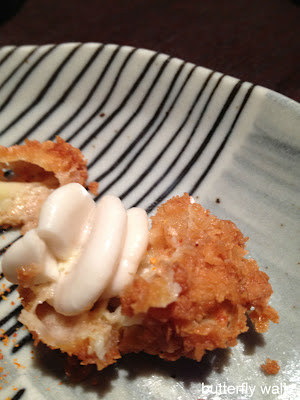 White fusili??? What's with the white coils or springlike thing??? And that's when the word "milt" striked me! Oops.. Fatty was perfectly fine with his "tempura" before.. but after seeing the "coils", he refused to have any! (^^||) I thought it might be some kind of intestinal thing or possibly roe.. It doesn't taste bad or smelled pungent.. it's pretty bland actually. Not rubbery at all, just soft and creamy.. like eating tasteless fish roe or slightly springy tofu.

Well, we googled "milt" in the car, after leaving rakuzen.. found out what it was.. and fatty's totally put off! Of course I had packed the rest of our milt tempura home! I wanted to show piggies, of course (^^)!

In case you are wondering what shirako or milt is.. this is not for the faint-hearted *beware!*.. check out the write ups by serious eats, the kitchn and loneleeplanet. Read at your own risk! You may be put off permanently!!! I was fine till I saw pictures of raw shirako ~ I feel "iggy" right now.. (^^||)

Anyways, we had a great time at rakuzen.. it's one of the more consistent, interesting and reasonably-priced japanese restaurant chains around. And the set dinners that we had ~ salmon sashimi and beef teppanyaki ~ was absolutely delicious! And the deep-fried oat breaded tempura shirako was INTERESTING, to say the least! An eye-opener.. we definitely learned something new today ^^. 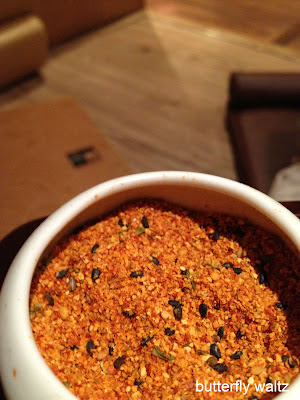 Posted by pudgy butterfly at 2:33 PM

Email ThisBlogThis!Share to TwitterShare to FacebookShare to Pinterest
Labels: eats, happiness is..