I'm such a "duh" sometimes.. being chinese, asian and all, you'd expect that I would know what kumquat is ^^|| 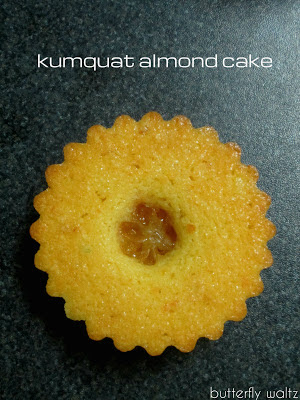 But I've been ignorant. I've heard about it many times but never really took notice of how it looks or taste. In fact, aunt had one growing right in front of her garden for years, so she says ^^||!

I finally tried some 2 nights ago (after a tip-off from mel ^^), and the taste was so very familiar.. like some sort of "kert" or lime! It's a little tart (though not as tart as I'd imagined ^^!), but yet it's a little sweet too (it's no sweet tangerine!). And there's barely any juice in it.. lots of seeds though. I wasn't even sure if I should eat it whole or have the skin peeled off.. I chose the latter, but that didn't quite seem right either ^^||

1. Cream butter and sugar till light and fluffy.

2. Add eggs one by one, beating well after each addition. Don't panic like I did ^^ if the batter looks watery and weird after the addition of eggs.. it's like that ^^

3. Mix in sifted flours and almond meal till well combined.

5. Divide batter into 18 2-inch tart tins (use these mini tins, or you'll have too much leftover kumquat halves for this bake! I used 3-inch tins and only managed to fill 10 tins!). Fill moulds about 2/3 full as cake will rise. Top batter with a kumquat half (do not press the kumquats in as it will naturally sink later!)

1. Weigh kumquats. Then weigh the same amount for water and half the amount for sugar. ie. kumquats:water:sugar ~ 200g:200g:100g

2. Slice kumquats in half. Boil kumquat halves, water and sugar till kumquats turn soft and glossy.

4. Puree the rest of the kumquats with some syrup, and reserve 60g of puree. Leftover puree can be used as jam or topping ^^ it's delish!


And what a yummy-licious bake this turned out to be! Beautiful citrus-y scent and color! Oh-so soft and moist, almost melt-in-the- mouth texture.. and hints of almond meal.. it's DEELICIOUS!!! ^^ If I wasn't the one baking this, I wouldn't think this was possible with kumquats! And all this is thanks to mel ^^ check out her blog for yummy pictures and better details of this recipe ^^


I can totally understand the ravings by mel and all those who have tried the recipe now! It's really GOOOOOOOD!!! ^^ Thanks so much for sharing one of your favorite cakes, mel! It's GORGEOUS! (^^)

p.s. since I have so much kumquat halves and puree left, I can make this again! yay! personally I enjoyed these cakes even more after it's rested and cooled properly, as the citrus-y flavors bloomed! Well, that's if you can resist eating them fresh out of the oven ^^!


Posted by pudgy butterfly at 4:43 PM

aiyoyo...amigosh!!......I am jumping in excitement when I see this! This is why you should know whenever I see Kumquat, I be like that, lol!! I am so so sooooo glad you made this because it is really delicious, and am I right?
I am sure you are going to make this again and again. When my eyes caught seeing the kumquat at Tesco, I nearly yelled out so loudly! I have one recipe coming up with Kumquats but stay tuned...hee..hee....
(hey what's wrong with your last post with that almond cookies? can't seem to get that post back on line, you deleted it?)

all thanks to you, mel ^^! these cakes are yummy-liciously delicious! and oh-so pretty too! am so glad i made them ^^ everyone loved it! will look forward to more kumquat recipes from you, though i won't be making the kumquat madeleines you shared earlier for lack of pan ><||

i've just re-posted galette bretonne.. you should be able to see it.. i pulled it out temporarily as i felt bad and sad over friday's events.. that was a really terrible thing to happen to anyone.. i'm glad to have my piggies safe and sound.

Ooo, my parents would love these cookies! We all love kumquats!

these are really delish, lynna ^^