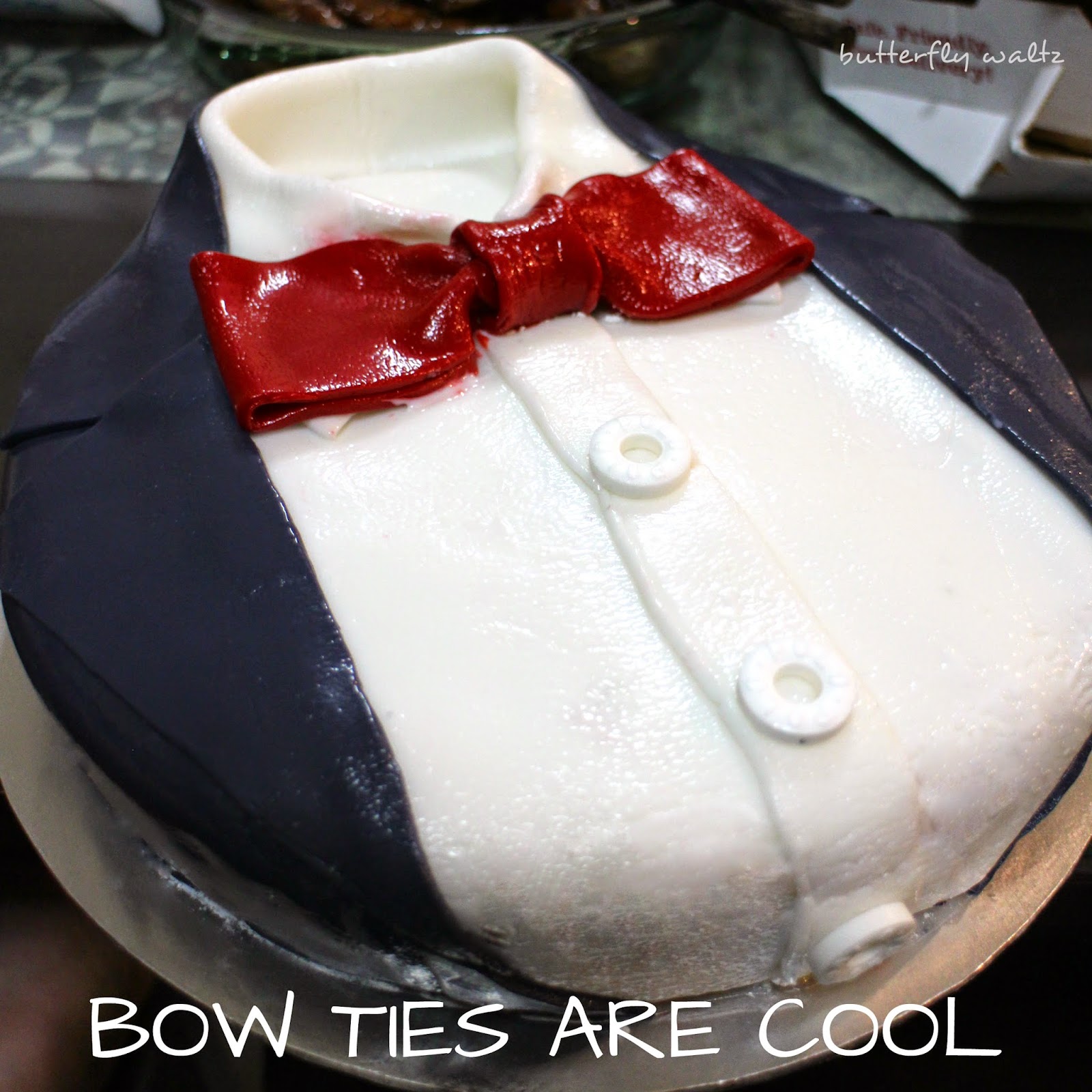 My Big and Baby pig are big fans of Dr Who. And they both think bow ties are cool! ^^

Hence my first attempt at fondant.. and a Dr Who bow tie cake for Baby pig's 13th birthday party. Ok, I can hear you. Don't laugh too hard, and cut me some slack. ^^

I just want to say that the shiny, glossy, sticky, wet look in the picture above, is really all due to the fondant sweating.. because of temperature change from cold to hot, humid (even with the air-con switched on! maybe not cold enough???). And remember, covering a COLD cake with room-temp fondant is also a NO-NO! Fondants are really temperamental! No sudden temperature change, please.. or you'll have sweating, sticky fondants! I learned this the hard way. Youtube didn't quite have this information, and the post on handling fondants in humid weather doesn't sink in till you experience it for yourself! ^^||


You know, I was feeling pretty upbeat when I had the white shirt collar, bow tie, jacket lapels fondant cut out. I had assembled them on a piece of parchment paper and they looked so perfect ^^.. exactly how I wanted them to be.. nice, dry and neat (!!!). However, the minute I covered the cold cake (red velvet cake with cream cheese frosting) with fondant (white shirt and dark grey jacket), it started to sweat and turned wet and sticky! Holy moly, yikes! ^^|| ^^|| ^^||

Of course, I've read that the fondant sweating will dry out eventually if you leave it at room temperature. But I could't do that! My cream cheese frosting could melt! What a Catch 22 situation, right? ^^||

Well, I'm trying not to be too harsh on myself. It's a pretty decent 1st attempt for someone who has never touched/used fondants.. and depended on youtube videos, some how-to fondant posts and one write up on handling fondants in humid weather by faitmaisonblog (too bad she didn't mention about fondant on cold cakes ^^||). Maybe I shouldn't be such a cheapo and maybe attend some classes.. nawwwwwhhh, I'm not doing this again for a long, long, long time!

Despite how it looks, the kids loved the fondant (eeeks!) and the red velvet cake with cream cheese frosting. No pics of the cake I'm afraid, but I'm definitely going to make this red velvet recipe again.. it uses butter ~ my kind of cake ^^ 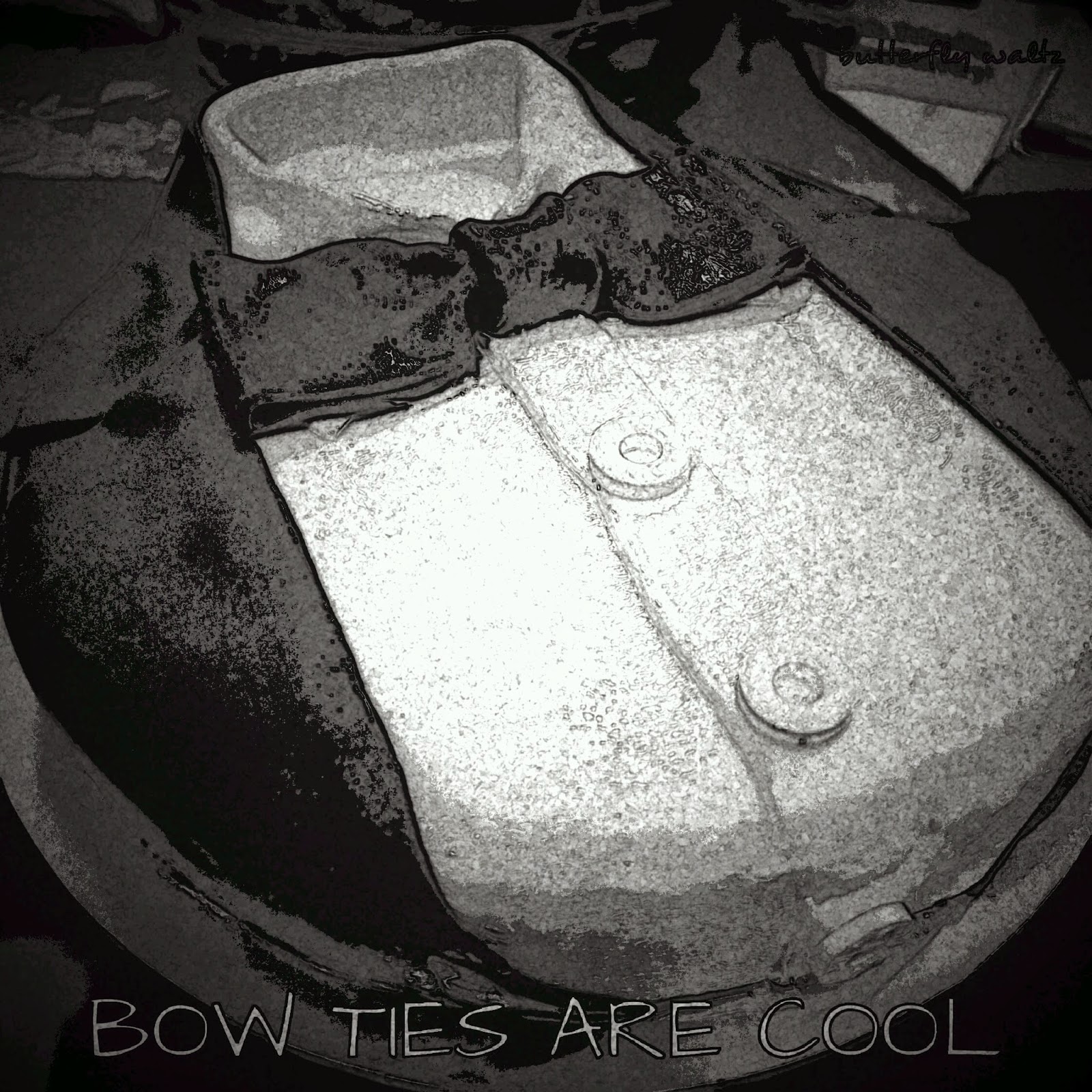 Anyways, take away the shine and gloss, it's pretty ok. ^^ More importantly, Baby pig was very happy with his surprise cake! And I got 2 big hugs from him! And that's all that really matters! ^^ ^^ ^^

Email ThisBlogThis!Share to TwitterShare to FacebookShare to Pinterest
Labels: cakes, happiness is.. 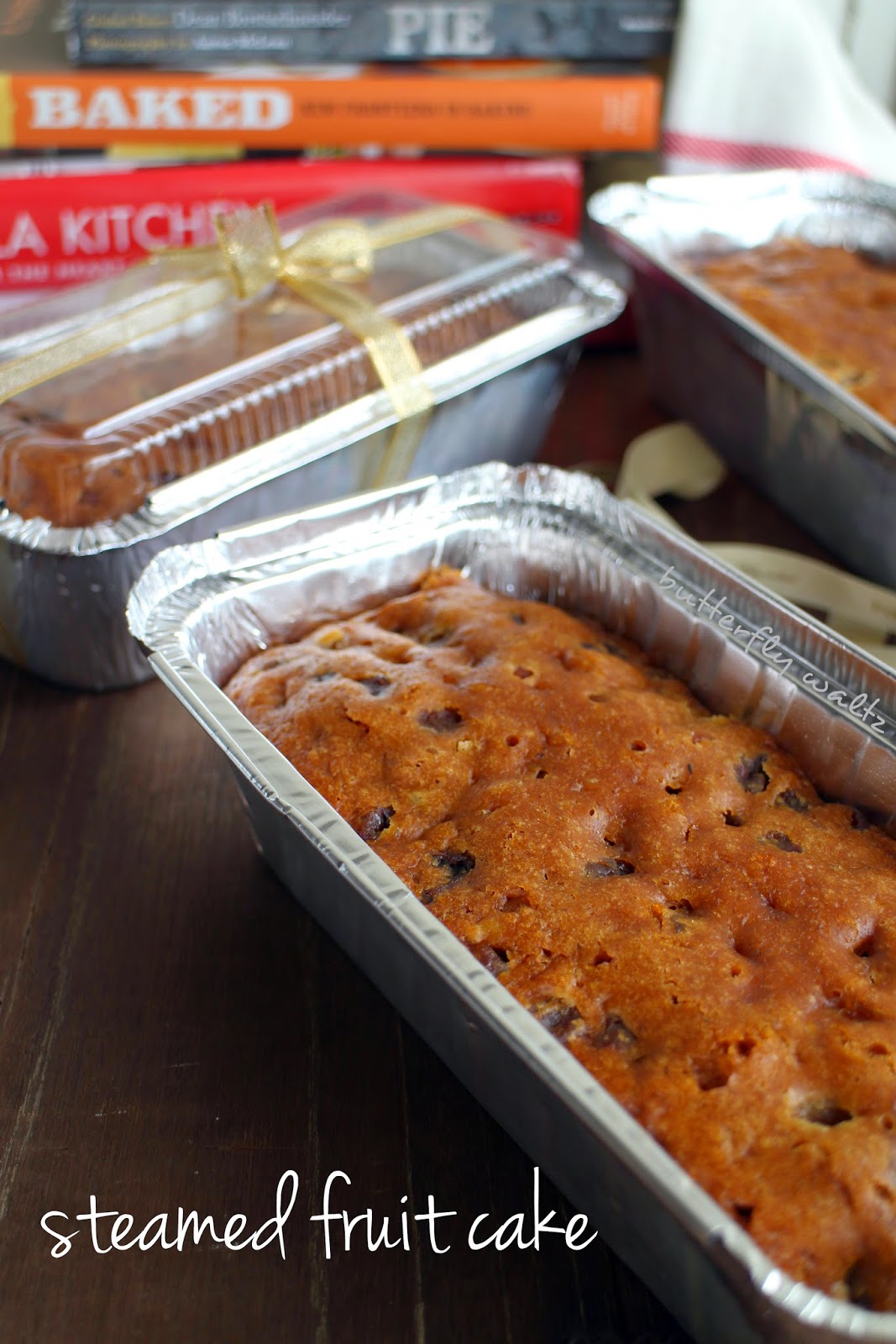 The last time I made this, I swore never again will I use the steaming method!

Over time (2 years!), my burn scar is a few shades paler, and my memory faint. But you know what, deep down, there's always that niggling thought of wanting to slay this dragon! ^^

So when I saw a post in azlitamasammanis on steamed fruit cake baked in small aluminium foil tins for a much shorter time, I knew my time has come! I immediately macerated my mixed fruits, and set about thinking where to place my tiny electric steamer in my tiny apartment/kitchen without setting the house on fire.. and more importantly, where I won't get burnt!

And over the weekend, I made the cakes using azlitamasammanis' recipe, and a recipe shared by mel@melskitchenpantry (from faeez@bittersweetspicy). I now have 12 loaves in the fridge now ^^ waiting to be shared with all my favorite people. ^^ ^^ ^^

1. Make caramel by placing sugar into a heavy saucepan over medium heat. As sugar melts from the sides, fold it to the center. DO NOT STIR. When sugar is completely melted and turned dark golden brown (not burnt!), add in hot water slowly. Be careful as it mixture may sputter.

2. Add in butter and let it melt completely. Fold in mixed fruit, and bring mixture to a boil. Remove from heat and leave to cool.

3. Sift flour, baking soda and cream of tartar, and nutmeg or cinnamon (if using) together in a clean bowl. Fold into cooled caramel mixture till well combined.

4. Beat eggs with a whisk or electric beater till foamy, and add into cake mixture.

5. Mix in vanilla extract and treacle till well blended.

6. Pour into 3 aluminium tins (7.5x3.5 inch loaf tin), cover with a layer of aluminium foil and steam for about 1 hour and 45 minutes. Turn off the heat, and leave the cakes in the steamer for another 15 minutes before removing.

This is a pretty straightforward recipe. However, this recipe makes a lot. I split the batter over 3 tins, and it was almost full.. ok, so I added a bit more mixed fruits (600g) than suggested (oops! ^^||). So that might have made a difference. The top didn't turn out as pretty as I wished, as the cake touched the cover and absorbed moisture. Looks aside, I'm sure it's delish. I can't wait to taste it! ^^

Anyways, I'm happy to make the recipe shared by mel. I upped the mixed fruits to 500++g and called it a day. This recipe also uses less sugar and flour, just the way I like it. And if you do not have a steamer, and/or prefer to use the oven, do not despair! I've shared how one can also perfectly bake a "steamed fruit cake" in this post. Works just as well! ^^ 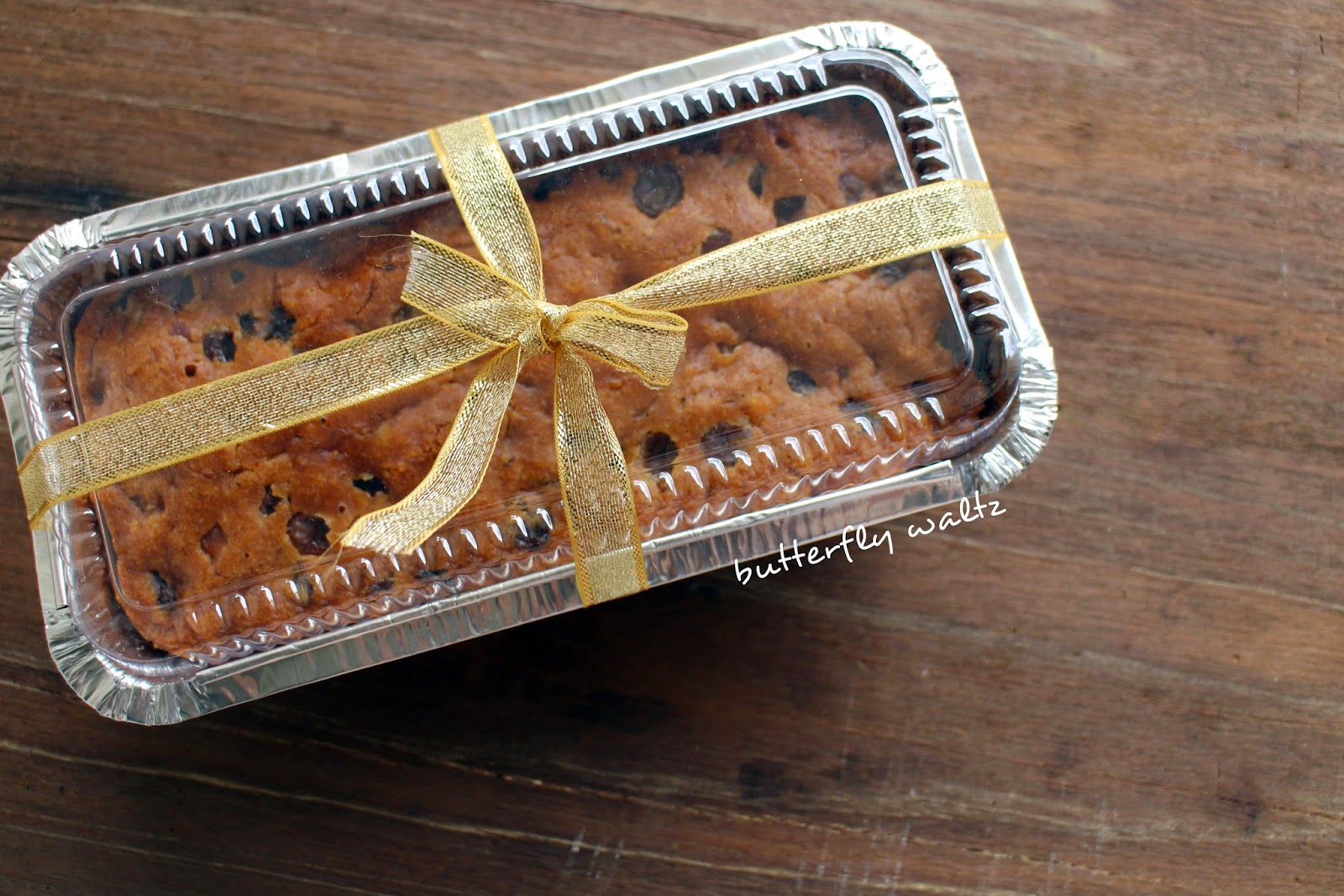 
Updated: I've cut and tasted the cakes from the 2 different recipes and made comparisons. 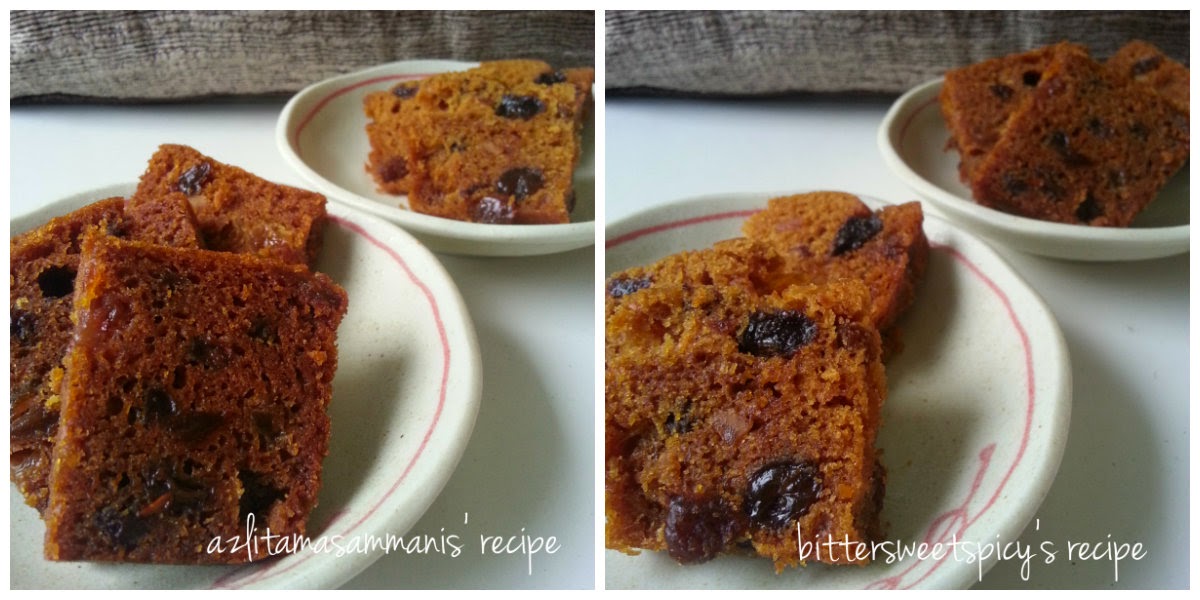 Azlita's recipe: Looks and cuts beautifully. It's lusciously dark and moist. The crumbs looks tight and the texture gorgeous.. however, the chew has a wee bit of boing-boing, and feels more coarse than faeez's cake. Taste is good. Fragrance nice and unusual. Cake is nicely moist.. though it "looks" more moist (than it is) compared to the other cake.

Faeez's recipe: Doesn't cut as neatly as the cake tends to crumble. Cake is lighter in color, like golden amber. The texture is also less tight and looks crumbly when compared to azlita's. Taste is good. Fragrance is nice. I feel this cake is a whisker more moist than azlita's, despite it's crumbly look.

Conclusion: Looking back, I think faeez's recipe did better when it was baked "bain-marie" in the oven. The texture turned out just like azlita's steamed one. Both cakes are winners in my opinion. I can't decide which I like better. Visually I like azlita's. But faeez's cake is very good too. Now you know. Your call now ^^

My nephew, Baby pig, mentioned that azlita's cake has a unique fragrance, but he finds the rum flavor (mixed fruits used are all macerated in rum in the same bowl) not as evident compared to faeez's cake. I could tell he enjoyed both the cakes ^^. His choice: Faeez's cake.. by a few whiskers! ^^

Fatty hubby's choice: Faeez's cake. His one comment.. "it's rich".

Posted by pudgy butterfly at 1:05 AM 2 comments: