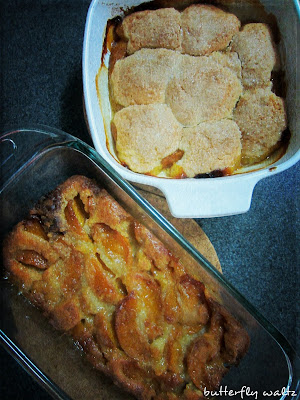 And a whole Sunday evening helping out at the victorian-themed party (the word servant somehow comes to mind ^^||).. Anyways, I volunteered for it ^^. Isn't that what all good aunts do *angelic look* ^^? Btw, you won't forget about that trip to spain you promised when you're rich, right, piggies? *wink**wink**oink-oink!*

While I was on my feet the whole evening, my eyes was on a southern peach cobbler ^^ made by one of big's guests! ^^ The prize of hard work ~ a piece of yummy treat! ^^

My first thought after tasting southern peach cobbler was that it's a rich, pudding-like dessert with a soft-chewy texture.. so different from the crisp, crumble-like cobbler I had in mind. That friend (an american, mentioned that the soft, rich pudding-like dessert is the "real" southern deal) had added a tinge of rice flour to the recipe as she ran out of all purpose flour, which made me wonder if rice flour made the dessert chewy.. My curiousity was piqued!

So I decided to make 2 versions of southern peach cobbler ^^ ~ half a recipe each ~ just to compare! The first recipe turned out exactly like the one I had last night.. only much softer and less chewy ^^. The second recipe produced a nice crisp, cobbled crust with a soft cake-like texture underneath. ^^

1. Heat oven to 350F/180C and melt butter in a 9x13" oven-proof baking dish in the oven. I left melted butter in the oven longer to bubble and turn golden.. and made browned butter, yums! ^^

2. In a bowl, mix flour, baking powder, sugar, salt and cinnamon powder till blended. Pour in milk and mix till well combined.

3. Remove the baking dish with melted butter from the oven and carefully put batter into melted butter. Do NOT stir.

4. Then place sliced peaches on top of the batter. Do NOT mix.

5. Bake till golden, about 55 minutes. Serve cold or warm, with a dollop of ice cream if you like. ^^

1. Place sliced peaches in a greased oven-proof baking dish. Sprinkle some cinnamon powder over and put bits of butter all over peaches.

2. In another bowl, blend flour, baking powder, sugars and salt together. Blend in diced butter till mixture resembles coarse meal. Mix in water till batter comes together.. you'll end up with a thick, soft runny batter.

3. Drop spoonsful of batter/topping all over peaches. Sprinkle 1 tsp sugar over the topping. Bake in a preheated oven of 400F/200C for about 40-45 minutes, or till golden. Serve warm or cold ^^.


I enjoyed both! Same name, same ingredients (almost! ^^), but totally different taste and texture.. one tasting richer than the other (I like! ^^).. both GORGEOUS! Perfect with a nice cup of coffee ^^ and for sharing. ^^ 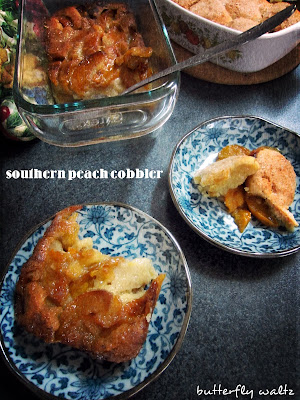 Oh, yes! The whodunit party was a success ^^! Even if the teen-guests didn't quite figure out the murderer! They embraced their roles so whole-heartedly, came properly dressed in victorian garb and spoke in snooty english/russian/etc throughout dinner as per their characters, dined, drank and be merry (till someone was murdered! and quickly forgotten, haha!) over a beautifully laid out 6-course dinner with (sparkling) wine! 'twas a wonderful evening! ^^ 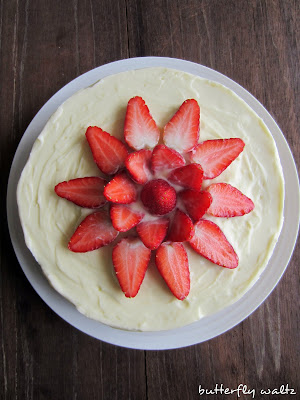 p.s. the swirled strawberry cheesecake (no cracks! ^^) and mascarpone topping (a wee runny, but delish ^^) was good, but the cake as a whole would've been better without the cookie base. it's just my personal preference.. i'm not exactly a fan of digestive biscuit. well, they ate the cheesecake anyways, and the peach cobbler.. and the almond tart.. as well as the nama chocolates ~ teens with voracious appetites, yet not gain weight??!! life is good ^^!!! and happiness are days like this.. ^^

Hi Hui
Oooo.....cobbler! I have yet to bake cobber and that word already sound delicious. So, which one would you highly suggest for me to bake? The southernnplate or the allrecipe? I think I choose the southernplate recipe. It sure looks very delicious and yummy. Your cheesecake look beautifully done with the strawberry decor on top. Look real sweet. Everyone gobble up everything and that makes you a happy Aunt. I can imagine the party everyone are all with big smiles and laughter throughout the party! And especially with such a delicious food on the table too; Nama Chocolates especially!

That sounds like a fun party. I'm sure the kiddos had lots of fun. Not to mention, all those yummy food to enjoy.

I'm amazed how little change in the ingredients can yield such a change on the end result. :) I love peach cobbler and can't wait to give this variation a try.

both are gorgeous, mel.. i found the southernplate peach cobbler rather unique and rich (very good with tea/coffee ^^).. and the taste grows on you ^^ the allrecipes one is almost like apple crumble, with an unexpected cake-like texture right under the crust.. which i find interesting ^^.. if you do make the super-easy pudding-like version, do let butter sit in the oven till bubbly and golden for a nicer, nutty flavor ^^ i recommend you try southernplate's recipe for something unusual, easy and nice ^^

hi, amy.. it was really interesting to explore and compare the different techniques of the 2 recipes.. which are almost the same but yet so different. i enjoyed them both.. ok, maybe one a whisker more than the other because of the browned bits part ^^

Love it both ways, though I am a bit partial to the crumble =)

Two versions of cobblers! They both look amazing and look delicious in both different ways :D

thanks for dropping by, zoe ^^ when my curiousity is triggered, i go a little nutty sometimes ^^||, baking 2 recipes side by side just to compare and see the outcome ^^ so now i know ^^ the addition of rice flour does make pudding-like bakes a little chewy.. and 2 same(-almost!) recipes with different techniques will yield different yummy results ^^

I can only imagined everyone with their hoity toity English uppity slang :)... and to dress in Victorian garb, wah rajin and ada class :)

Nice! Both of your cobbler looks very tasty! I don't think I have ever had a pudding like cobbler. I would love to try that. This will be so good in a cold gloomy day.

hi lokness.. hope you get to try some rich pudding-like cobbler one day ^^

That's a fun experiment to use the same ingredients and baked differently! I bet both were delicious by looking at the pictures! I love peach in cobbler!

i had fun making the 2 yummy cobblers ^^

wow. this just looks so delicious. I wish i had some peaches right now.

Fresh peaches would be really nice ^^ but it's hard to come by here.. so it has to be canned peaches.