home alone.. and a light dinner

I was on my own last weekend.. 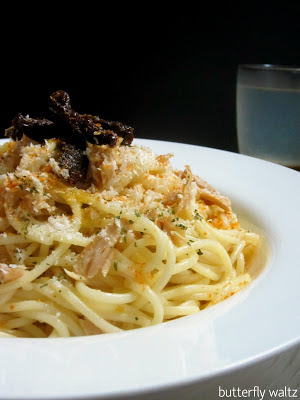 And about to take the easy way out (take-out ^^) when I visited jasline's blog and saw the tuna and lemon spaghetti recipe she shared.. and changed my mind ^^. For the original no-cook recipe, check out martha stewart's.

I combined both jasline's version and martha's.. and found this pasta really light on taste, even with the addition of garlic (as per jasline's adaptation), grated parmesan cheese and chili flakes. There's just the slightest hint of lemon in the pasta, which goes quite well with the tuna. However, I couldn't quite taste the breadcrumbs, but it could be my fault for using ready-made ones ^^||. I also replaced the kalamata olives with sun-dried tomatoes ^^.

Well, as much as I like hearty and robust meals in general, I also enjoy an easy, light and refreshing pasta dish like this occasionally.. on my own, of course. (^^)

Posted by pudgy butterfly at 8:18 PM

I find myself eating alone often---I will have to give this a go...really, who feels like doing a bunch of dishes for themselves? (My least favorite part)...it looks really yummy, Hui!! =)