My refrigerator's usually full.. but this last two weeks, it looks like it's about to burst at the seams!


Even fatty hubby who never notices such things, commented on it! ^^||

I suspect it's because I haven't been cooking/baking very much.. but sssshhh, I told fatty it's because of the "stuff(??)" we have to stock for CNY! ^^

Well, I've been trying real hard to "clean" the fridge as much as I can. While I've cleared most of the old fruits to store sweet tangerines (see it's full again!), the rest of the fridge is still a mountain of work ^^||!

Anyway, I've made "some" inroads over the past few days, clearing what's left of the kumquat halves, syrup and puree, minced beef, sour cream, chicken breast meat, kimchi (in a jar that's taking up a lot of space!), rice, canned tuna, chopped nuts and half a block of butter amongst others.

2. Mix all the wet ingredients together in a mixing bowl. Then fold in the dry ingredients till well combined. DO NOT OVERBEAT.

3. Bake in a loaf pan or 2 small tins for 1 hour, or till the skewer comes out clean. 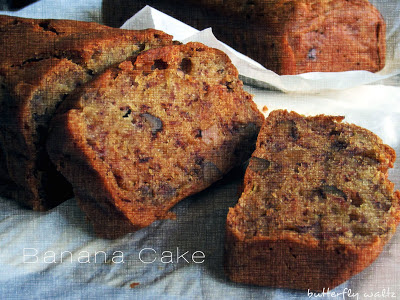 This is not my usual banana cake, but I thought I'd give it a go since I had half a bar of butter to get rid of.. and it looks super easy and quick ^^! And since I've always wondered how chocolate chips and raisins taste in banana cake, I added some too ^^. I like this cake ^^.. it's extra loaded with flavors, moist and spongy-soft.. very nice ^^ And like most cakes, this banana cake shines when it's rested and cooled. ^^


While it seems everyone has (almost-)finished their marathon-baking and preparations for CNY, I'm making a wild, mad sprint to spring clean the kitchen/fridge and the rest of the house! At times like these, I wish I had a bigger kitchen to store a bigger fridge and a smaller living space (in an already tiny apartment) so that there's less to clean! Or maybe i should just wish for a maid??? ^^

I really don't prepare much for CNY, no cookies, no ang-ang decorations or whatsoever.. but I really like having a neat and clean house to welcome the new year ^^.

Posted by pudgy butterfly at 9:57 PM

Hehehehe......My fridge is full loads of vege and the tangerines too...and oh boy luckily my fridge is big enough to store for whole week of stuff in. I did clear up all those unwanted stuff and put in fresh groceries in. You know, that day Giant has a good bargain for kumquat and guess what...I bought a kilo for 4 bucks! When I saw that on offer, it is like I saw gold! And wow, even you are clearing your old stuff from your fridge, you could whipped up so delicious meals. You are a good cook, Hui. And here, i would like to take this ooportinity to wish you Gong Xi Fa Cai, may the new year bring good health, abundance of wealth and lots of laughter in your family.

Trust me, Hui! No fridge is big enough! The bigger the fridge, the more you buy and keep! Eventually, it runs out of space again...

thanks for the encouragement, mel ^^ i'm "trying" to cook ^^ but as they say, good cooks (like you), cook real food.. poor cooks (like me), cook fast food ;P what do plan to do with so much kumquats??? can i assume you'll be sharing more kumquat recipes soon ^^? i must say the kumquat almond cakes are FABULOUS and special! perfect for cny ^^ i hope you'll have a good cny too, even if your loved ones are far away, mel.. at least you have your dear with you.. and us for company ^^

haha.. i believe you, chef ^^ i can totally imagine that happening! i'm already a chronic food hoarder and shopaholic.. er, wait, how is that bad? i like that! ^^

It sounds wonderful to have a clean clatter-less house AND these delicious food on the table!!! My husband is Chinese but we won't be celebrating big...just eating out this weekend with some small relatives (his side) here. Your banana bread looks delicious. I love making different kinds of banana bread (as I always have bananas). Thank you for your inspiration!

hi, nami ^^ i cannot say this banana bread is the best ever.. but it's nice esp for a quick fix and minimal washing ^^ hope you have a nice cny weekend!

ah, good to see I'm not the only one not into all those marathon bakings and preparations. sometimes I'm kind of glad I'ms taying alone overseas in a tiny studo hehe. having a big bash tmr at a friend's though, so better be off making something yummy after all. love all your meals, woahh wish I spent more effort on my meals in the week. anyway, hopped over from another's blog, thought to say hi. happy cny :)

hello, shu han ^^ it's really nice of you to stop by and making the effort to drop a line. i have to confess.. i don't cook as many weekday dinners as i should ^^|| these dinners are extra effort as i had to clear the fridge ^^||. do hope you'll have a wonderful cny celebration with your friends!