Well, you may have realized by now, that one of the reasons I remain terrible at cooking, is that I'm simply lazy (^^||)! So meals at home means it's usually some super easy one-pot meal or minimal cooking/ingredients dish. Occasionally, I do get inspired to cook by other bloggers' beautiful works and put a little more effort in my cooking! But most times I cook with whatever ingredients I have in the fridge. Other times I avoid cooking ^^||. Then, there are times I cook, when an ingredient just happens to fall on my lap! As the case with the fermented black beans ^^.. (a little far fetched but almost true ^^)


Hence the "inspiration" to make my very first steamed spare ribs with black beans.. a really popular dish at dim sum restaurants. Fatty hubby's wild about them (?!).. I'm not.. at least not crazily so (^^)

1. Mix and marinade spare ribs with black beans, garlic, ginger, sugar, sesame oil, rice wine, cornstarch, soy sauce (if using), salt and pepper (and some finely sliced red chillies too) for at least 30 minutes (or longer) in the fridge. I thought the fermented black beans were salty enough, but they weren't.. so a dash of soy sauce or a pinch of salt was necessary.

2. Steam in a heat-proof dish for 20 minutes or till cooked. Serve with some garnishing of spring onions and red chillies, if you like. 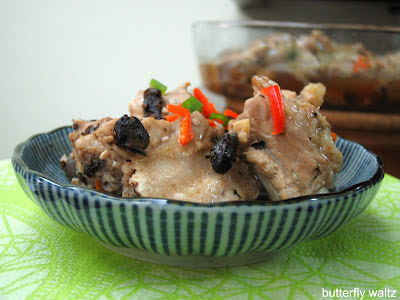 I don't know why, I've always thought this dish as difficult to make.. It's not. Really. If a klutz like me can do it, anyone can! It's super easy and super delicious too! You can even steam this dish on top of your rice using the rice cooker. Just pop in the marinated meat just as the water in the rice stops bubbling. Close the lid and let it cook with the rice. Do not open lid immediately after rice is cooked.. dish up after 10 minutes or so. 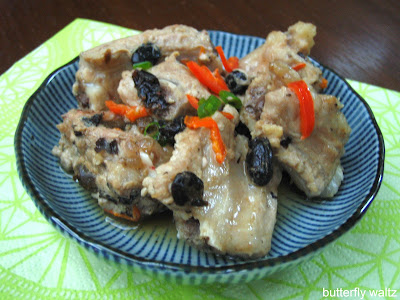 Fatty hubby and piggies enjoyed the spare ribs even though they were a teeny-weeny bit chewy/tough. (^^||) I think I really should make it a point to get those soft spare ribs part after all ^^. Me, I actually like them kinda chewy (^^)

Guess who's happiest today? (^^) Ze fattest pig of all, of course!

Posted by pudgy butterfly at 3:18 AM