I've never been a fan of dried oysters! And shiitake mushrooms and radish!

They all smell so bad to me, I'd run a mile when someone cooks any of those stuff! But all 3 ingredients are ALWAYS cooked during Chinese New Year.. aaargh!

Anyways, during our trip home to Kuantan for the chinese new year last week, we stopped by a shop selling dried stuff like oysters, scallops, anchovies, fish maw, baby shrimps, and the very famous kuantan "ham yue" aka salted fish. We were not planning to buy much until I spotted, or rather 'smelled' some dried oysters. They were huge! And they looked really fresh and juicy! They still smell bad, though. 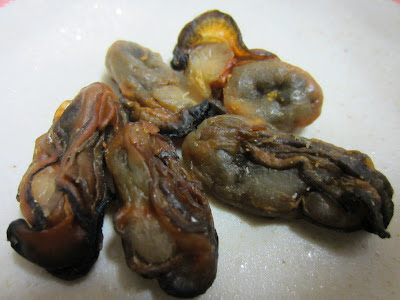 Dried oyster, otherwise known as "ho see" in chinese, has a very good connotation, especially so during chinese new year. "Ho see" means good things, an abundance of good things.. and to the chinese, this is very very good (^^)

As turned off as I was with the smell, the dried oysters looked so succulent, that I couldn't resist buying some for ourselves, MIL and fatty hubby's bosses. A good way to start the new year on the right foot with the bosses, don't you think? (^^)

4. Add some sesame oil and spring onion before serving. 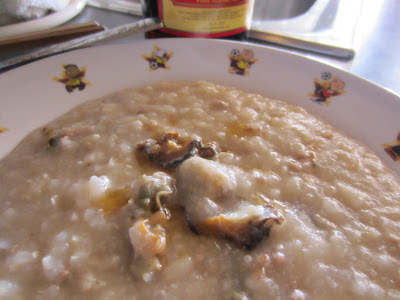 So what did I do wrong? I soaked the dried oysters twice and threw away the water. They smell especially 'fishy' soaked in water (> <). Aunt says that I've washed the flavor away, doing that. And I should have added the water to the porridge. 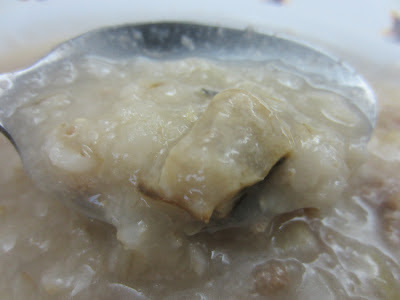 No wonder I thought the taste of the porridge was quite nice (^ ^), no strong-fishy flavor. I thought the minced ginger took away the 'fishy-ness'. By the way, I think the koreans really got it right about the use of grated/minced ginger and ginger juice in their cooking. Beats sliced ginger anytime! Can't see, can't taste, can't feel.. really good! And best of all.. all dishes taste amazing!

Posted by pudgy butterfly at 3:22 AM